3rd party apps are critical to the development and expansion of a company’s business processes since they enable remote and hybrid working.

Connecting an app to your Google workspace or Microsoft 365 environment is a routine action that most people take for granted, much like clicking on an attachment was in the early days of email.

A single user activity, such as sending an email or changing a CRM contact, might trigger a variety of other automatic responses and notifications across all of the platforms that are interconnected.

Using the OAuth technique to link apps is incredibly simple, and many people don’t think about the possible repercussions. Permissions to access data are often granted without question to SaaS platform apps and other add-ons.

As a result, bad actors now have more ways to access a company’s confidential information. Supply chain assaults, API takeovers, and hostile third-party apps are all at risk.

It’s currently possible for security teams to prohibit potentially dangerous programs and files from running on local devices. When it comes to SaaS apps, it must be the same.

OAuth 2.0 substantially simplifies authentication and authorization, and provides fine-grained delegating of access permissions, making it easier for users to share information. In the form of scopes, an app asks the user’s permission to provide particular privileges.

One or more scopes can be requested by an app. The user gives these apps access to their environment by approving the scopes that allow them to run code that performs logic behind the scenes. An executable file is as dangerous as a malicious app.

Read More: How to Become a Paparazzi Verified Person

To protect a company’s SaaS stack, the security team must be able to identify and monitor everything that occurs within the company’s SaaS environment. To reduce the danger of third-party app access, a security team can discuss and handle the following with their staff.

1 —An organization’s staff should be educated.
Awareness is the initial step in cybersecurity, and it’s always the most important one to take. Employees will be more reluctant to use OAuth methods once they are made aware of the vulnerabilities they pose. A company policy requiring employees to submit requests for third-party apps should be implemented.

2 — Gain insight into all business-critical apps’ third-party access.
In order to protect their business’s vital SaaS apps, security teams should have access to all of the third-party apps that have been integrated with them. When reducing the threat surface, the first step is to get an understanding of the entire environment.

As the last step, the security team should keep track of which users have been authorized access to this information. High-privilege users who allow access to a third-party app, such as those with sensitive documents in their workstations, may pose an instant security threat to the company and must be remedied promptly.

4 — Make use of the automated technique to handle access to 3rd party apps
Third-party apps can be automatically discovered by SaaS security posture management tools. In order to map out all the 3rd party apps with access to the organization’s SSPM integrated apps, the correct SSPM solution, like Adaptive Shield, has logic built in. Security teams now have the ability to keep track of, monitor, and secure their organization’s SaaS stack regardless of how many apps it contains, whether a company has 100 or 600.

The Bigger Picture of SaaS Security 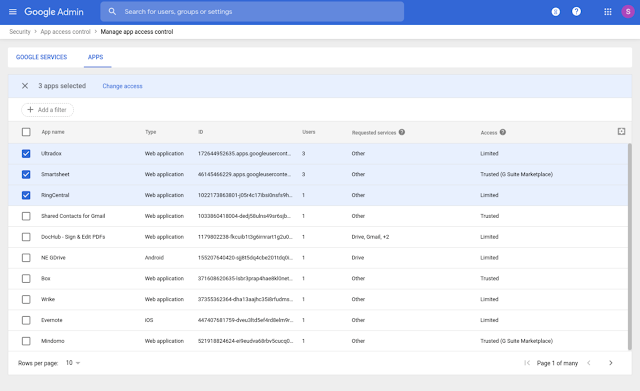 To protect a company’s SaaS stack, the security team must be able to identify and monitor everything that occurs within the company’s SaaS environment. The SaaS Security Posture Management picture is not complete without 3rd party app access.

SaaS stacks and communications between recognized apps and platforms are not adequately protected or monitored by most current cybersecurity solutions, leaving firms open to attacks and unable to effectively identify or manage who has access to important corporate or personal data.

Each and every program, as well as any third-party apps that have been authorized access by users, should be able to be viewed by an organization’s administrators. SaaS-based applications that have too many privileges can be blocked and security teams can keep control of the SaaS stack.